“What do you want to be when you grow up?”

It’s a question we often get asked as children. And our answers might depend on when we were born, as different professions appeal to different generations.

So which are today’s most respected occupations?

In each nation, 1,000 members of the general public were asked to rank the list of professions from the most respected (14th) to the least (1st).

Doctors topped the global list, followed by lawyers and then engineers. Head teachers also met with approval, but there was less respect for those further down the pedagogical ladder – secondary and primary school teachers lagged behind police officers, nurses, accountants, local government managers and management consultants. 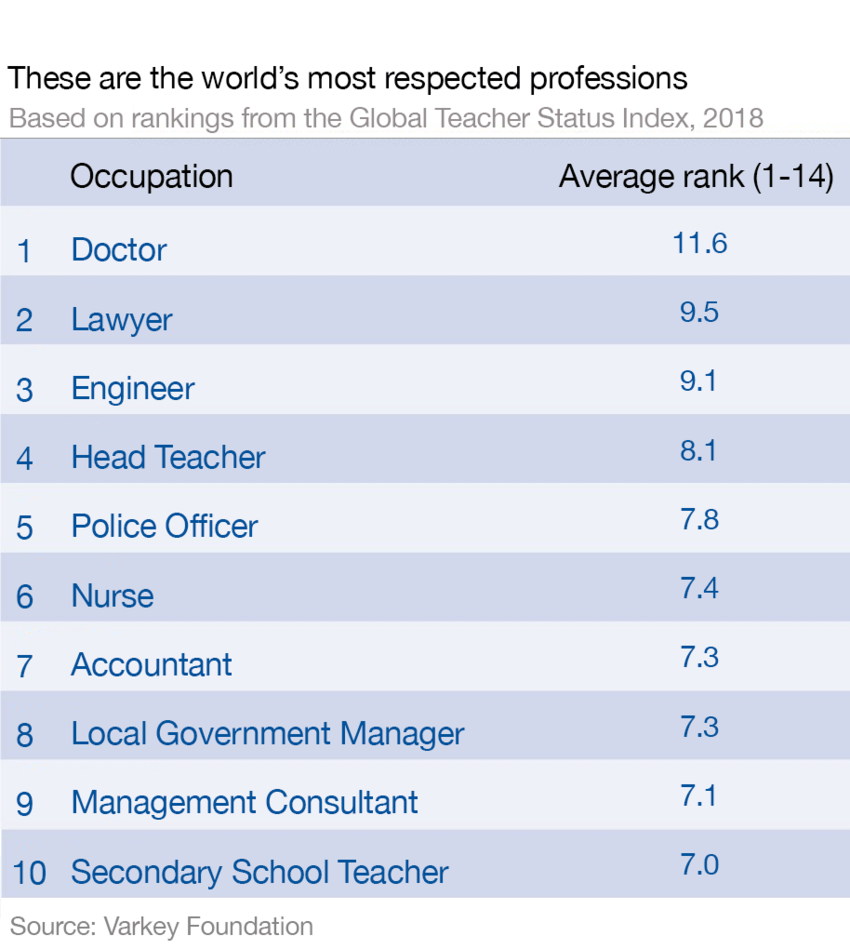 Librarians fared even worse, consigned to the bottom of the table below web designers and social workers.

In the future, however, when robots and algorithms are performing many jobs previously done by humans, this list may look quite different.

The technological advances of the Fourth Industrial Revolution are transforming the way we work and the jobs we do.

Until recently, automation was chiefly concerned with replicating unskilled or repetitive tasks. But advances in robotics and artificial intelligence (AI) mean that machines can now “think” more like humans, bringing automation to professions like medicine and law.

For example, an algorithm has been shown to perform basic legal tasks more efficiently and much faster than highly trained lawyers. And as algorithms become more sophisticated they will be capable of performing more complex aspects of tasks performed by lawyers and doctors.

What if, in the future doctors or lawyers were robots, would people still have as much respect for fields like medicine and the law?

The future of work

During the First Industrial Revolution there were fears of mass unemployment as machines took over tasks from humans.

Similarly, the arrival of the Fourth Industrial Revolution has sparked fears that robots will put millions out of work.

The World Economic Forum’s Future of Jobs Report 2018 states that almost 50% of companies surveyed expect automation to reduce their full-time workforce by 2022.

But the report also notes that while automation may displace 75 million jobs, 133 million new ones could emerge, with in-demand roles to include data analysts and scientists as well as software and applications developers.

It also states that 38% of businesses surveyed expect to extend their workforce to new productivity-enhancing roles. And more than 25% of respondents expect automation to create new roles for their business.

But in the future world of work, there will also be demand for the personal touch, with predicted growth in roles that leverage distinctively “human” skills.

Bulgarian exports increased by nearly 10%
Next

The medical center in “Trakia Economic Zone” offers innovative prevention for the staff of the companies November 20, 2021

Education and energy bring together the Confindustria and Trakia Economic Zone October 5, 2021